Filling In at NU

We were the fill in pep band at Northwestern University on Dec. 15th for their game vs. the Univ. of Miss at Kansas City. The 'cats took it to them and we had a great time. Here's a bunch of photos.
http://picasaweb.google.com/papajazz1973/NUPepBandDec152008#
at December 21, 2008 No comments:

Alright, For those of you out there that desperately want to be able to sight read better, you have to try this site. You can pick the difficulty of rhythms, different meters and set the tempo. Then you can play them on your own with your own metronome, or play along with the computer demonstrating the right rhythm. Best of all, It's FREE!
http://www.practicesightreading.com/index.php
Improving your sightreading is 98% about your ability to read rhythms.
at November 07, 2008 1 comment:

Email ThisBlogThis!Share to TwitterShare to FacebookShare to Pinterest
Labels: Sight-reading

I've always taken it for granted that my students would learn the blues scales, but what I'm learning is that they don't really KNOW them. Actually, they don't really KNOW most of their scales in general. They can figure them out, but they can't move up and down and around and through them with very much ease. I've been teaching my students out of Greenblatt's book on the blues http://www.shermusic.com/new/1883217385.shtml and he makes it so easy to blow over the blues, using the major and minor blues scales. If only the students could master these scales, they could really start to blow! The other issue is that, while they may know a one octave scale, knowing these scales over the entire range of your horn is quite another thing, especially if they're not starting on the root. If you're looking for a great beginning to intermediate improv. book, this is great... it comes with a couple play a long CDs and is available in Eb, Bb and C versions. I highly reccomend it.
at October 29, 2008 No comments:

Email ThisBlogThis!Share to TwitterShare to FacebookShare to Pinterest
Labels: Playing the blues 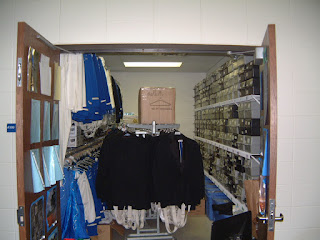 Last one: The old Uniform Room (MAXXED OUT!) 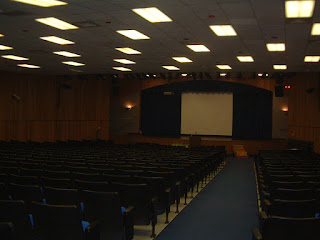 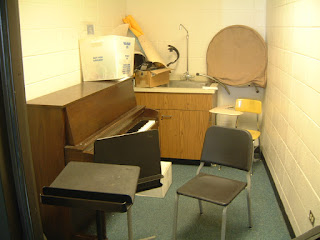 This one has the piano that I redesigned and auctioned off as a piece of furniture... 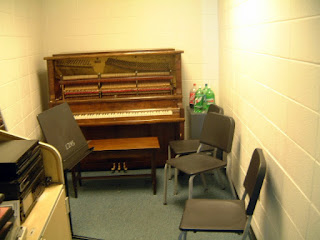 Email ThisBlogThis!Share to TwitterShare to FacebookShare to Pinterest
Some more old LZHS:
The music hallway (now it's like Business or something!) 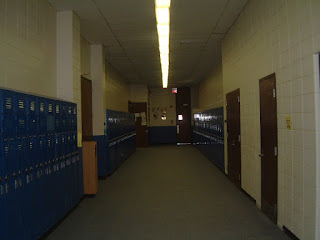 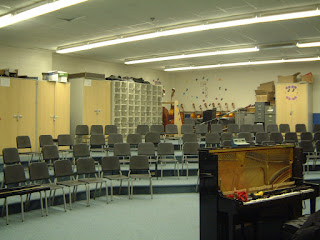 The band room: (actually it was a lot closer to the football field for marching practice, and windows?!, what a concept!) The column in the middle of the room was convenient too, especially for sleepy percussionists.. 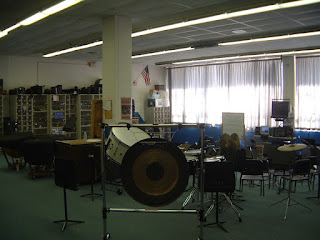 If you look in the back of the room, the door in the middle is the MIDI LAB!! 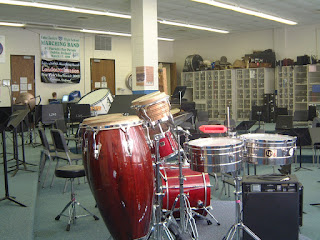 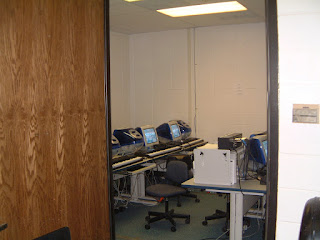 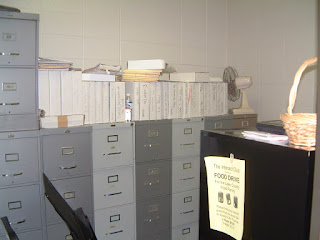 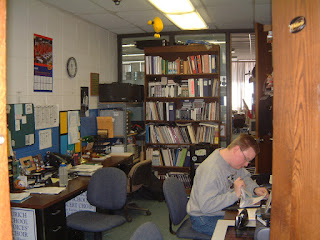 The Music office (it used to be just for 2 people)

So today I found a bunch of great stuff for jazz improvisation practice. If you really want to get serious.... First of all, Band in a Box is the standard for learning to play over the changes of any tune. I use it to create playalong tracks for my bands for any solos that they have. There is no substitute when it comes to developing your ear, you just have to hear the changes over and over.
It's normally $129 at pgmusic but you can get it a lot cheaper at Kelly's Music. Academic price is only $89!! You just need the basics... It's a little pricey, but it's all you'll need-yes, Aebersolds and Hal Leonards are good for play-a-longs, but you can do all that and a lot more with this program. You can then fine massive amounts of standard tunes and extra styles on line, from other users like This Site and This Site

So it's great to have tunes to play over and a way you can plug in your own changes to work on (ii-V7-Is) or other groups of chords, but did you know that you don't have to play a new scale for each chord change? Most turn arounds and chord progressions actually have one scale in common (ex. ii-V7-I) and others (blues). I just found this great program for $20 that lets you plug in Band-in-a-Box files and analyzes the whole tune so that you have fewer scales to think about. You can check out the demo before you buy it. While at first it seems a little confusing, it really does a great analysis and makes the process simpler. This is one of those things that the pros and people with good ears do automatically, but it's really cool to figure this out sooner rather than later. Check out this site!!! It has a ton of other stuff too.....

Unfortunately, I didn't get the kind of jazz education I needed in high school. College got me going, but since jazz wasn't my major, I missed some of the nuts and bolts. Now that I'm teaching it everyday, I've been working my way through a number of different elements of jazz that I could hear, but not understand. One of those is the ii-V7-I progression, found everywhere in jazz. There are plenty of ways of working through the changes, and it happens in bars 9-11, and 11-12 in a blues progression (not the most basic blues, though). I've put on my site a couple play-a-longs over ii-V7-I that you could practice over. Find them at

Just start by playing the scales over them (concert G dorian, C Mixolydian, F Mixolydian) and then get creative, working from a chord tone of one to a chord tone of the next.... Post if you have a question or thought.... 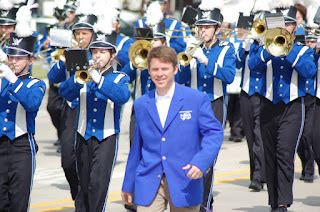 I just hope to let you in on what I'm learning and finding online and off. Hopefully, you'll find some of what I find interesting! No promises.....
T
at October 01, 2008